OUR ESTABLISHMENT: A HISTORICAL PLACE

A historic restaurant in Vannes

This quality establishment was founded in 1738. Initially located in rue Saint Yves (previously called rue d'Auray and then renamed rue Hoche in the early 1800s), the inn known as À l'Image Sainte-Anne moved in the middle of the 19th century to place du Champ de Foire, which has since become Place de la Libération.

In 1844, it appears on the first cadastres of the town in place of the Paul Bert secular school. The establishment was then a very popular post office, where people could eat and rest, and where horses were kept ready to allow a quick stopover.

In 1886, the owner at the time, Mr. Perrodo, was listed in the departmental directory as a cabaret owner. However, it was not until 1948, under the leadership of the Ligeour family, that the establishment became a real place of culinary excellence where Breton gastronomy was expressed to the great delight of local customers and passing travellers. Over the years, the quality of its cuisine and its efficient staff have been recognised by regulars and travellers alike. It is a renowned restaurant in Vannes.

Claude Le Lausque, who worked in the kitchen for nearly 40 years, passed the torch in 2015 to Frédéric Thebaud, who continues the culinary heritage of the establishment, while respecting today's requirements.

Why the name À l'Image Sainte-Anne?

Quite simply because the establishment was located at the time on the route de Sainte-Anne d'Auray, an old street originally serving the Visitation convent and the Nazareth convent before the rectification of the Vannes crossroads, which gave it its role as an exit towards Auray. 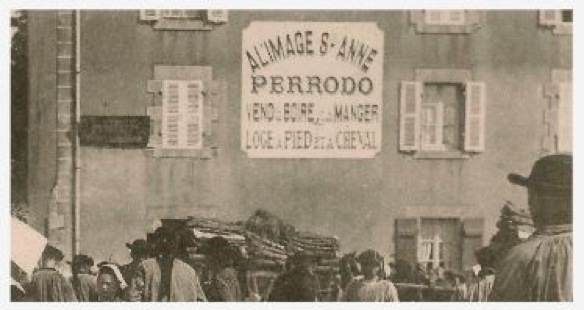 Facade of the Auberge À l'Image Sainte-Anne in the 1900s.

A renowned restaurant in Vannes

Over the years, the quality of the cuisine and the efficient staff have been recognised by regulars and travellers alike. À l'Image Sainte-Anne is now a renowned restaurant in Vannes. We have taken care to preserve the original values of the establishment which are: natural conviviality, rigorous choice of products and "home-made".

Our restaurant has also been awarded the "Maître Restaurateur" label since 2013. It meets a set of specifications combining the chef's professionalism and qualifications, the traceability and seasonality of the products and the requirement for entirely homemade cooking.

Today, our young chef Frédéric Thebaud, perpetuates this Breton tradition in this place full of history.

The chef and his cooks in the 1980s/Chef Frédéric Thebaud today.

The restaurant and hotel today

The À l'Image Sainte-Anne restaurant is today associated with the Kyriad Vannes Centre-ville hotel. The hotel offers 45 rooms in a warm atmosphere mixing modernity and tradition. Located in the heart of Vannes, it is ideal for a gourmet stay full of discoveries.

Treat yourself to an evening in our restaurant À l'image Sainte-Anne and discover the richness of our menu offering traditional and creative cuisine with a Breton accent, a menu between land and sea that evolves with the seasons, as well as our large selection of wines.

Come and taste dishes that smell of the authenticity of the region! During the evening, you will travel through the history of the restaurant and that of Vannes, thanks to the many historical photos on the walls of the establishment.

The restaurant room, a dish and the menu today.